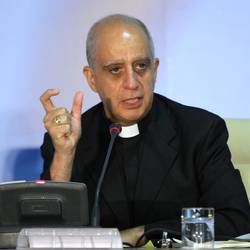 By John Smeaton (originally posted on his blog)

Once again, Archbishop Salvatore ‘Rino’ Fisichella, President of the Pontifical Council for Promoting the New Evangelization, employs a false understanding of conscience to justify a position which is contrary to Catholic teaching.

I have written previously about the archbishop’s article in L’Osservatore Romano in 2009, which implied that there are difficult situations in which doctors enjoy scope for the autonomous exercise of conscience in deciding whether to carry out a direct abortion. On that occasion, Archbishop caused irreperable damage to the cause of protecting unborn children, the weakest, most vulnerable members of the human community.

Today in La Stampa, he uses a false understanding of conscience to cause damage to the integrity of marriage – and once again, it’s children who will be the principal victims, including unborn children, since children conceived outside of marriage – the exclusive, permanent union of one man and one woman – are 4-5 times more likely to be aborted than those conceived inside marriage

Matthew McCusker, an SPUC researcher, and a spokesman here in Rome for Voice of the Family, commented:

“Archbishop Fisichella does not sufficiently distinguish between a well-formed and an ill-formed conscience. The Church would not be acting mercifully or pastorally if she changed her teaching or practice to accommodate ill-formed consciences. Her pastors would in fact be neglecting their clear duty to assist Catholics to form their consciences in accordance with the truth.”

In his interview in La Stampa, Archbishop Fisichella responds as follows:

*Would you readmit remarried divorcees to the Eucharist in certain cases?*

“I don’t want to start judging and theorising based on specific cases. But who in today’s world can say they have not had cases of members of their own families living together or divorcing? Unfortunately, we are immersed in a reality in which the beauty of marriage has been wounded. There has been too much emphasis on the Canonist, or legal, dimension of marriage, which has led us often into the waters of legalism. Recuperating the sacramental dimension would make it easier to find different solutions, in continuity with original doctrine. Here we return to the primacy of conscience. Nothing and no one can intervene in this. Of course, it must be a conscience that is illuminated by the Word of God, that is reflected upon and that accepts the obedience of a path.”

Fortunately, many Synod Fathers – albeit not widely reported by the media – are standing up for the Catholic position on marriage and are courageously seeking to protect our families in their interventions at the Extraordinary Synod. For full reports and commentaries go to Voice of the Family and subscribe for our future posts.