Letting bishops conferences decide their own way on homosexuality and divorce is impossible, says Cardinal Arinze 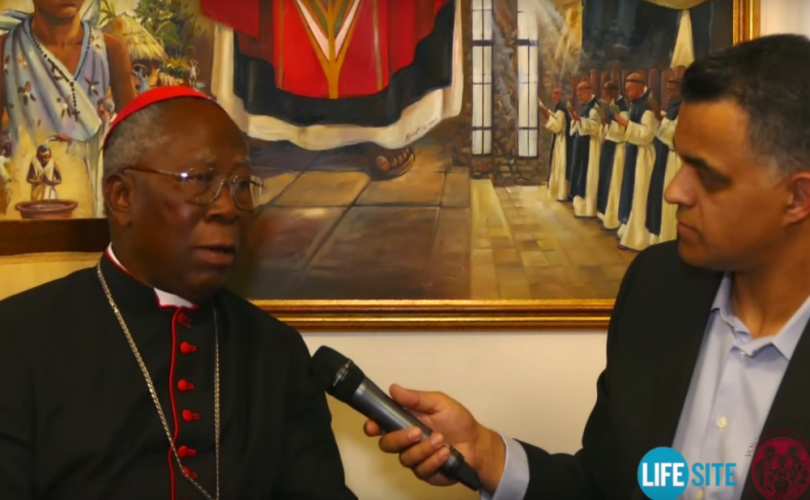 ROME, October 19, 2015 (LifeSiteNews) — While some say a majority of Synod Fathers support allowing different national regions to establish their own ways of dealing with contentious issues such as homosexuality and divorce, Cardinal Francis Arinze of Nigeria has stated that the proposal is impossible for the Catholic Church to adopt.

“The Ten Commandments are not subject to national frontiers. A bishops’ conference in a country cannot agree that stealing from a bank is not sinful in that country, or that divorced persons who are remarried can receive Holy Communion in that country, but when you cross the boundary and go to another country it now becomes a sin,” he told LifeSiteNews in an exclusive interview in Rome on Saturday.

“You can see you then, if we did that, we have made the Ten Commandments a matter of decision according to sensitivities in each country. It cannot be so,” he added.

Arinze, prefect emeritus of the Congregation for Divine Worship and the Discipline of the Sacraments, said that the Catholic Church is “one” in her faith and morals.

“So, we don’t have power to modify [what Scripture teaches us]. For example, St. Paul says that those who receive Holy Communion should look into themselves because the person who receives unworthily receives judgment against himself. This is Holy Scripture. This cannot be subject to voting at the level of bishops’ conferences or even voting across continental frontiers.”

“You can see, the Church is not actually a national Church, it is one body in Christ. The Son of God came down from heaven and gave us this way of salvation and prayed that all his followers may be one, as he and his Father are one,” he said.

Arinze said that while bishops conferences “are important” for examining particular “national situations” facing the local church, such as respecting local culture in liturgy or providing solutions for the poor and the sick, they do not have the power to change “faith and morals, what we are to believe and what we are to do or not to do.”

“When it comes to practical details that don’t affect faith and morals, bishops’ conferences can look into that and should,” he said.

Last week during a Synod press briefing, German Abbot Jeremias Schroder mentioned both “the social acceptance of homosexuality” and dealing with “divorced and remarried persons” as examples “where bishops conferences should be allowed to formulate pastoral responses that are in tune with what can be preached and announced and lived in a different context.”

The announcement drew strong criticism from Church heavyweights such as Cardinal Burke who called the proposal “simply contrary to Catholic Faith and life.”