Home » Articles » The Symphony of Truth

The Symphony of Truth

A preface by Fr Serafino Lanzetta for his new book

During the last years of my ministry in the UK, I began to think in English, which is not an easy thing for an Italian man! Freed from the linguistic barrier, I was able to reach a new audience of English speakers. I began presenting theological talks and writing essays for magazines or websites. While compiling all of this material into a book, it became clear that I needed to find a golden thread, tying all theological themes together and tracing their origin back to a single Truth.

Theology is in fact the intellectus fidei – the intelligence of the one faith, the same yesterday and today, composed of distinct but analogical mysteries. The truth is symphonic, as Hans Urs von Balthasar says. It is like one piece of music played by many instruments. The greater the variety of instruments playing the same piece, the better they express the beauty of that one musical score. The same should be true of the multitude of believers around the world. If this is not the case, there is something lacking, not in the mystery, but in the approach to the faith. The role of a single instrument is only clear within the context of the whole symphony. Similarly, it is only within the context of the whole faith, starting with the faith of the Church, that one can distinguish the peculiarity of a single mystery. This is what I tried to do by bringing together individual tiles of theology – theological opinions offering an interpretation of dogma and its defence when necessary, holding on as close as possible to revealed dogma — in order to compose one grand mosaic.

Starting in the first essay with the mystery of holy matrimony established by God the Creator and the Redeemer—a natural indissoluble pact elevated to the dignity of sacrament — I proceed in the second essay to discuss the theological problems ignited by Amoris Laetitia, the post-synodal Exhortation of Pope Francis on family life. This teaching, in addition to the endless hermeneutical question of its correct interpretation, raises a fundamental problem about situation ethics and moral consequentialism. It is not by chance that some authors, fascinated by this new moral teaching, have called for a “change of paradigm” in the moral sphere.

From here my discourse moves toward a philosophical and theological stance that seems to be common within the Church (though inadvertently): nominalism, i.e., the reduction of our theological words to a mere flatus vocis. For example, what is the right meaning of central concepts such as mercy, justice, pastoral care, and discernment? What do they mean today? The problem of nominalism is conducive to understanding Martin Luther’s thoughts more clearly. After more than five hundred years since his revolutionary vision, his thoughts are still relevant and are intriguing to quite a few people within the Church.

Another central discourse in this book is the discussion about Vatican II. How should it be interpreted? Moreover, would correct hermeneutics be the solution to such a complicated issue? After more than sixty years, the Church is still divided about the correct interpretation of the last council. Vatican II claimed that ecumenism was something urgent and non-negotiable, which is true as long as the aim and the effort are to establish a visible unity of all Christians within the only Church of Christ. However, while the unity ad extra should still be pursued, the Church has discovered a disunity ad intra, never known before. What should we make of Vatican II then? It is neither a super-dogma nor a council to be ignored, but one of the twenty-one councils of the Church – no doubt the most problematic one. This question is the focus of one essay. There is also another essay on Vatican II, dedicated to the reinstatement of the permanent diaconate as discussed in the Council Aula, which examines requests, results, and problems.

From Vatican II the book moves to discuss some questions of moral theology. Firstly, the importance of Humanæ Vitæ and also some contemporary attempts to overcome it by linking Amoris Laetitia directly with Gaudium et Spes, thereby overlooking Paul VI’s 1968 encyclical on marriage and life. One specific essay examines the uneasy path from the promulgation of Gaudium et Spes to Humanæ Vitæ, reviewing the theological and intra-ecclesial opposition in 1968. This vehement opposition to Humanæ Vitæ, together with the attempt to overcome it in the name of love and responsibility as envisaged by Vatican II’s Constitution on the Church in the Contemporary World, is surely one cause of the unprecedented moral crisis in the Church. The collapse of moral theology has undoubtedly favoured the widespread moral crisis of sexual abuse and cover-ups within the Church.

A Marian essay completes this symphonic analysis of the truth. Perhaps it is something new to our reader: Our Lady’s priesthood as a unique share in the only priesthood of Christ. I consider Mary as Immaculate Co-Redemptrix, who actively participated in our Redemption, offering in and with Christ to the Father the price of our salvation – that is, Jesus’s most precious Blood and the maternal sorrow of Her Immaculate Heart. Our Lady holds a unique and indeed higher priesthood, a maternal one, in relation to the priests and to all the faithful.

The hope is that the reader himself might find the whole discourse symphonic and might enjoy listening to it. Despite the several instruments playing, the sheet music that I followed is singular – the music of Truth – trying to put it first and above all my ideas or convictions. 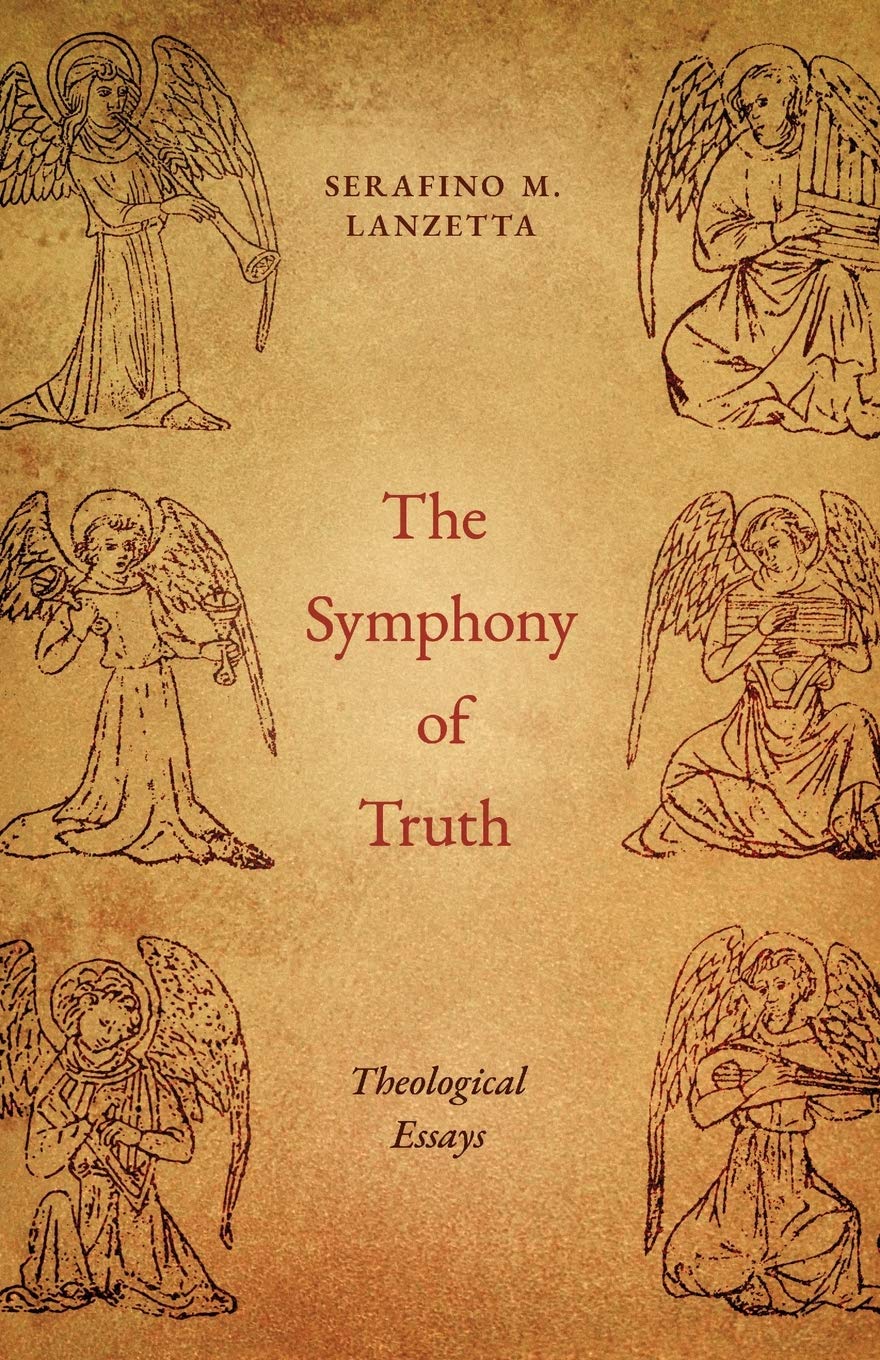 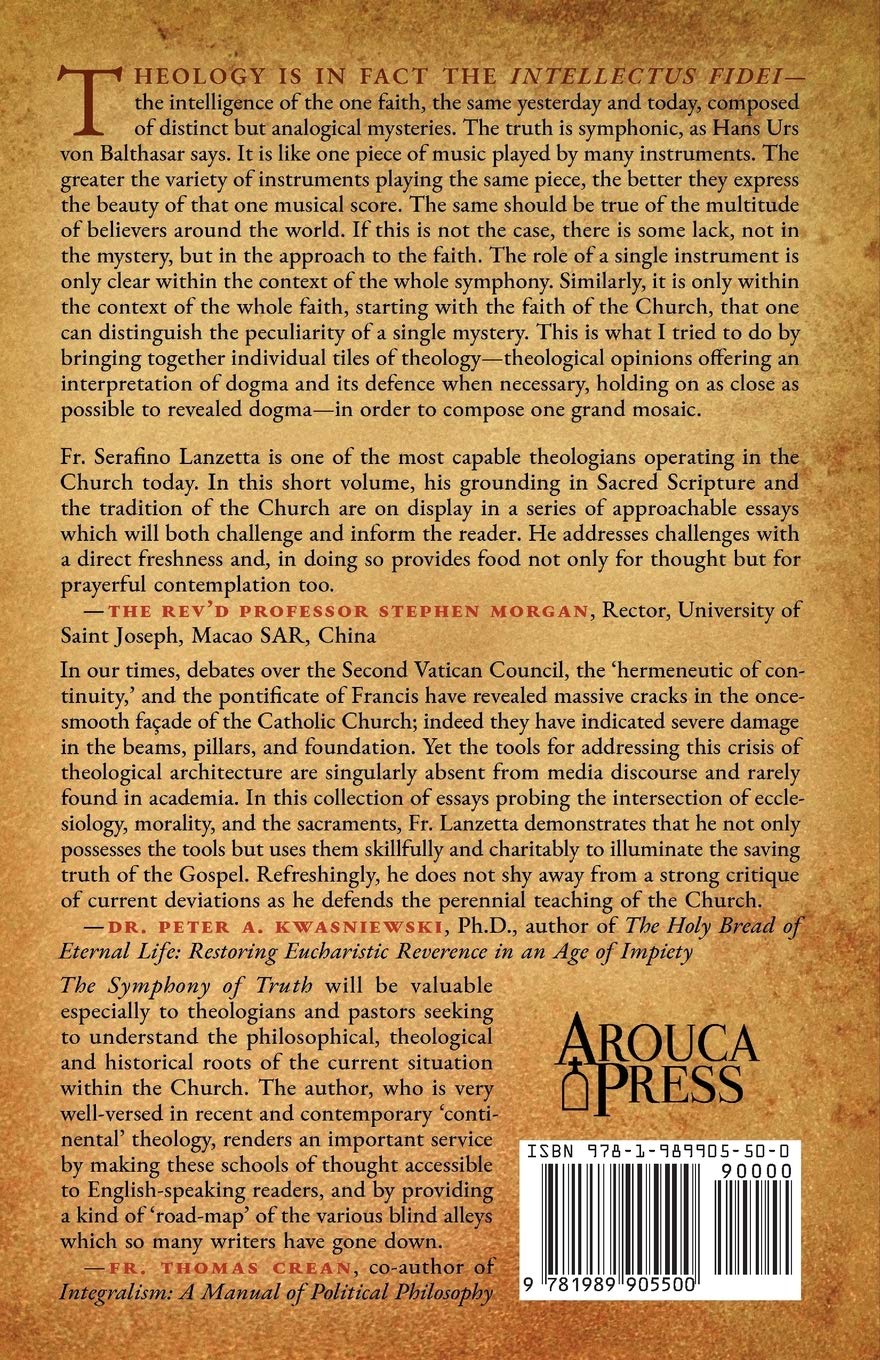 The Symphony of Truth, available from Arouca Press, has received words of praise from well-known theologians and scholars.

Rev Professor Stephen Morgan, Rector of the University of Saint Joseph, Macao SAR, China, said: “Fr. Serafino Lanzetta is one of the most capable theologians operating in the Church today. In this short volume, his grounding in Sacred Scripture and the tradition of the Church are on display in a series of approachable essays which will both challenge and inform the reader. He addresses challenges with a direct freshness and, in doing so provides food not only for thought but for prayerful contemplation too.”

Dr. Peter A. Kwasniewski, author of The Holy Bread of Eternal Life: Restoring Eucharistic Reverence in an Age of Impiety and numerous other books, pointed out that: “In our times, debates over the Second Vatican Council, the ‘hermeneutic of continuity’, and the pontificate of Francis have revealed massive cracks in the once-smooth façade of the Catholic Church; indeed they have indicated severe damage in the beams, pillars, and foundation. Yet the tools for addressing this crisis of theological architecture are singularly absent from media discourse and rarely found in academia. In this collection of essays probing the intersection of ecclesiology, morality, and the sacraments, Fr. Lanzetta demonstrates that he not only possesses the tools but uses them skilfully and charitably to illuminate the saving truth of the Gospel. Refreshingly, he does not shy away from a strong critique of current deviations as he defends the perennial teaching of the Church.”

And Fr Thomas Crean, co-author of Integralism: A Manual of Political Philosophy, added: “The Symphony of Truth will be valuable especially to theologians and pastors seeking to understand the philosophical, theological and historical roots of the current situation within the Church. The author, who is very well-versed in recent and contemporary ‘continental’ theology, renders an important service by making these schools of thought accessible to English-speaking readers, and by providing a kind of ‘road-map’ of the various blind alleys which so many writers have gone down.”

Fr Serafino M. Lanzetta STD exercises his priestly ministry in the Diocese of Portsmouth (England). He is a lecturer in Dogmatic Theology at the Theological Faculty of Lugano (Switzerland) and editor-in-chief of the Theological Journal Fides Catholica. His published works include his post-doctoral habilitation, Vatican II, a Pastoral Council: Hermeneutics of Council Teaching (Gracewing, 2016), and Fatima at the Heart of the Church: God’s Vision of History and Oblative Spirituality (2018).

Voice of the Family Digest